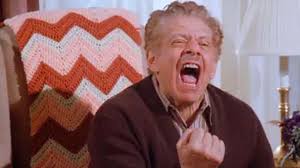 For someone like me, lucky enough to grow up with Seinfeld and Zoolander and pretty much anything else featuring him for longer than three seconds, Jerry Stiller was a comedy god, a Jungian archetype of the “hilarious old man who doesn’t give a shit;” others in this pantheon include George Carlin and Don Rickles, by the way. I’m pretty sure I quote Frank Costanza on a weekly basis. He reminded me of the old men in my life, how ridiculous they were, how far they would go for a laugh, for a righteous and meaningless victory in any activity or argument. Jerry Stiller’s characters weren’t my dad or uncle, but damn they felt like it.

I’ve been meaning write for the site for weeks now, but I was locked up. What am I supposed to say right now? Do I ignore the madness surrounding our lives? Do I get all preachy and political? Do I just pull a Michael Jordan “I’m back” message out of my butt and get mocked all to hell and back? I’m terrible at decisions. But the death of Jerry Stiller kind of solidifies two of my major takeaways from the world we’re all slogging through—shit, even the world before all of this:

Nothing, especially these fragile lives of ours, is forever. And a sense of humor can get you through anything.

Viruses and illnesses and deaths and incredibly, stunningly stupid politicians have pushed me into dark places mentally, and dark places artistically. Check out the commerce page, or our Instagram feed, and you’ll see. It’s therapeutic to get the negativity and darkness onto the canvas or page, but it’s still there, you know? What makes it more therapeutic, for me, is to offer a twist, a little bit of distance that allows perspective, makes it manageable. Again, for me, that’s humor: the “Springtime 2020!” message on the painting of hellfire and a demon wolf; the “toilet paper” written in the zombie’s eyes; Sweet Cosmic Lincoln demanding handwashing. This is the stupid pointless stuff that keeps me from running off the roof.

And Jerry Stiller just seems like the perfect person to encapsulate that idea today. Seinfeld was so often a negative, cold show, but there was always Frank Costanza (and, to be fair, basically all other characters) to put the perfect twist on things, to make even the darkest situation bearable, even laughable. Everything ends; death and hardship is inevitable. Might as well laugh your ass off while you can, make this hard, negative world something a little more to your liking.

So long, Jerry Stiller. This guy, this was my kind of guy.